Yes, another month comes along, and all the English subscribers and others who are coming to England in June pray that the weather will get better in time for Madstock 3 on the 22nd of this month.

I’ve received many e-mails from Madness fans in other countries asking me to send them more information about the concert in the hope that they’ll be able to make it for what could be the LAST MADNESS CONCERT. But more of that later.

Now, sit back and read the daft wafflings that may or may not be Madness related.

Well, most of you will no doubt be aware of how well Suggs’ latest single Cecilia did recently in the UK charts. Although it’s first week of entry was fairly undramatic, residing in the mid 30’s, some television coverage of the single ensured that the following week it raced into the top ten at number 7 (I think). Eventually the single climbed to the number 4 spot where it sat for a week or so before it’s gradual slip.

Music sources say that Cecilia has sold in excess of over 250’000 copies, so if that doesn’t encourage Suggs to continue his record career, nothing will.

Yes, it was revealed last month that top UK band Squeeze will be the main support act for Madness at their forthcoming Finsbury Park concert later this month. Other bands however are not as good, and somehow we have Mike Flowers playing!!! Don’t worry, I’m sure he’ll get missiles hurled at him from the skinheads at the front

BEDDERS SAYS “NO” TO MADSTOCK 3

Rumours have been flying round that a certain Mark (Bedders) Bedford will NOT be appearing in the line-up at Madstock 3. Apparently he’s has enough of this comeback lark and has refused to play.

After Mark’s absence from the Christmas concert tours in 1995 if is highly likely that the rumours are true. Mark can be seen playing in a band called “The Butterfield 8” down in Camden. If anyone is down that way, knock some sense into the lad.

CONCERT RENDEZVOUS NEEDS TO BE ARRANGED!

As the concert draws ever closer, the need for all people in the list who are going to the concert to arrange where to meet becomes ever urgent.

Finally, after many suggestions for meeting points it has been decided that we will be meeting up just inside the main gates (past the turnstiles) at 2PM.

Richard and myself will be there wearing grey “One Step Beyond” lyric T-shirts (much to Inbar’s amusement!) so we shouldn’t be too hard to find. We’ll probably hang around there for 20 or 30 minutes before finding a small area for us all to sit and watch the crappy support bands and drink beer.

For all late-commers, we will be back just inside the main gates at 4PM to meet any late comers to our little meet up.

One possible idea is if a number of us bring along camera’s to the Madness concert. It’ll be an excellent opportunity to get some great group photo’s of the mailing list which can then be put up on someone’s web page to let people see exactly what we got up to and who’s who.

Last month I contacted a member of the “Mean Fiddler” staff (the concert organisers) who deals with all aspects of the concert booklets. I explained to him about the mailing list and asked if it would be possible to have the details printed in the booklet in time for the Madstock 3 concert. He said that I should send him the details, and that’s what I did.

The only details I included were how to subscribe to the list, and the URL for Inbar Raz’s web page. I would have included everyone’s web page but it would have looked like I was trying to get LOADS of space in the booklet.

If the e-mail and URL do get printed in the booklet I hope that Inbar will make that first page have a list of URL’s of all other known Madness sites.

Inbar can be contacted on: inbar@glx.chief.co.il

A recent article in the music paper NME included an interview with the manager of Madness. He said that it was likely that the Madstock 3 concert would be THE LAST MADNESS CONCERT. This was mainly due to the band getting bored of playing the same stuff time and time again, and also that the number of people attending the 1995 Christmas shows were down on previous years. Is this the end, or just the latest in an on-going saga?

For everyone out there who still hasn’t got their ticket for the Madstock 3 concert, here are those elusive ticket details…

Tickets can be ordered from the show’s organisers, “The Mean Fiddler”, on:

If you’re not resident in the UK then “The Mean Fiddler” will NOT send you the concert tickets. Instead, they will keep the tickets for you at the main gates. On the day you just have to say your name and show your credit card and you’ll be given the tickets there and then.

CHECK OUT THESE SITES!

Madness fans who have previously visited “The Unnoficial Madness WWW – Homepage” at: http://www.innotts.co.uk/~aburns/index.html are urged to pay it another visit. It’s had a major overhaul in the graphics department and looks VERY nice indeed!

Or stay up to date with the Madstock 3 concert and more by visiting: http://www.euronet.nl/users/sjaak/Madness/Madconcert.html This site also sports some EXCELLENT and highly amusing JAVA animations of Carl Smyth doing his dance to One Step Beyond.
For more information, e-mail Jacco Van’t Riet at: sjaak@euronet.nl

This next site is so new that I haven’t even had time to check it out! The author, John Houston say’s that at the moment it contains some pictures and even some Madness samples! Thats got to be worth a look! The URL is: http://www.uea.ac.uk/~u9530037/madness/ and John can be contacted on: J.Houston@uea.ac.uk

Well, by next month the Madstock 3 concert will just be a memory. But for all you Maddies who weren’t able to make it to the concert there will be a full report in the next Madness monthly posting.

But don't you worry it's all in competent hands, We believe it's under the ribs or one of the glands 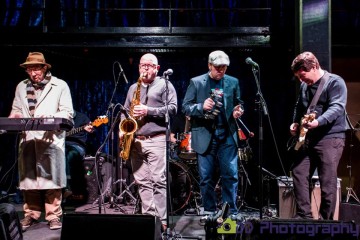