During the past week Madness completed their pre-album touring in Germany, and in the process managed to visit old graffiti on The Berlin Wall, which the band had originally sprayed on some 35 or more years ago.

Moving on to the end of the month now, and on October the 29th (the day after the new album comes out) you can watch Madness performing the House of Common gig, which took place back in the summer. The concert airs on the Sky Arts channel, and a trailer is currently doing the rounds promoting this programme.

Confirmed Track listing: 16 songs.  (As shown as the download album on iTunes and Amazon)

These 16 should also be the CD album in full. Chris Foreman has mentioned that not all 16 fit on the vinyl release much like the vinyl edition of The Liberty of Norton Folgate which was the select shortened track listing.  He comments that this was ALL the songs, which may made the boxset second disc is made up of versions and demos of these songs.

The Lee Thompson Ska Orchestra – Bite The Bullet ** Out Now **

Tracks – Based on Amazon – Step It Up Sister, Bite The Bullet, Western Standard Time, Cuss Cuss, On Her Majesty’s Secret Service, Feel a Little Better, Hongry, The Wickerman, 30,60,90 , I am King, Cry To Me, I’ll be back again.
HEAR TRACKS IN PREVIEW
https://www.amazon.co.uk/gp/product/B01GM41SM6/ref=dm_ws_ap_tlw_alb7

Yes, at last here it is – what you’ve been waiting for!

You can now pre-order the Specialized 5 – One Heart tribute to Bob Marley & The Wailers the 2016 Specialized theme.

THE SILENCERZ – ‘LIVELY UP YOURSELF’

The Silencerz – ‘Lively up Yourself’ – Specialized – ‘One Heart’ Album

It’s not easy to dissect & choose your best parts to a song that was originally done by a stand-out artist like Bob Marley, but more so when its covered by such a distinctively unique ensemble of musicians, as make up the Silencerz.

If the instruments alone played on the intro of this reggae cover arent quite enough to enrapture you, Daley’s alluring sound on vocals added to that mix soon does, and just rounds the whole tune off beautifully. I So love the sax on this one, the tune is just so wonderfully Thommo-fied.

Mr Thompson informs MIS that this live take was recorded at a gig at a local school in North London, it captures the bands atmosphere together on stage but is wonderfully mixed from the sound desk to crystal clarity so no audience intrusion, just spontaneous performance with some fx echoes added for good measure too.

You can get this gem on the album from Specialized shop online, see the “Buy It” section and listen up yourself.

It Must be love

Girl (why don’t you answer to your name)

Ahead of this month’s gig at the Dubai Duty Free Tennis Stadium, Suggs – the famous frontman of the ’70s ska band Madness – writes about the glorious history of 2-Tone in Esquire Magazine

They were pretty dark times at the end of the 1970s in the UK, which helps explains the rise of punk music, and you had this racist stuff going on as well. But all of a sudden this mushroom of hope, 2-Tone, sprouted out of the darkness. You had the second-generation of West Indian Brits coming through. You had Bob Marley appearing on the Old Grey Whistle Test show on TV.

Our band was into that kind of music because we liked reggae and ska and other music with black influences, as well as the Rude Boy ethos, but there weren’t many other people around who were into it when The Specials first popped up. They really were the “it” band because they were one of the first to have black and white members. We opened for them at the Hope & Anchor pub in Islington, in front of about 40 people, but the next thing we were on the 2-Tone tour with them, The Selecter and Dexys Midnight Runners and it all was kicking off.

How did we keep our enthusiasm going for this long? I go back to the fact that we’ve been friends since school. The whole point of the band was that it was a product of our friendship, having a laugh and having a good time. This has resonated with all the work that we have done and we still really thoroughly enjoy it, hence our new album. We called it Can’t Touch Us Now because we went through lots of ups and downs, we were castigated by the press, but things are better than they have ever been. The intelligentsia, the authorities can’t touch us, so it seemed like such a great name for the album. And we recorded it quickly, and we’ve captured the early energy of the band. It sounds great. I know everyone says that about their new record but it’s true with this one.

This week, MIS co-editor Rob Hazelby, goes back in time to report on what was going on in the world of Madness 5 years, 10 and 15 years ago this week.

This issue got off the starting blocks with the news that tickets to Shotts Opera Group’s version of the Our House musical were now on sale. The group were due to perform from Tuesday 1st to Saturday 5th November.

Moving on, and we knew that many MIS readers were members of the now defunct Chas Smash Forums, and so it may have interested you to learn that a possible reunion meet up was now in the works.

Mark ‘Chigs’ Charlesworth contacted us earlier in the week with his plans to organise a reunion of the people who were members of the Chas Smash Forums. This would take place at some point during the Madness Weekender.

Mark told us that at present he didn’t know when during the weekender the reunion would take place, but if there was enough interest then he’d liase with others as to when an appropriate time could be arranged.

Next, we reported on the sad news that musician David Bedford had passed away from lung cancer at the age of 74. David was the string arranger on many Madness songs we consider to be some of their finest tunes.

David Vickerman Bedford was a British composer and musician. He wrote and played both popular and classical music. He worked with Madness, arranging the strings on “Rise and Fall” amongst others. He scored for Deep Purple, Elvis Costello and worked on Tubular Bells.

We brought this issue to a close with the news that this week Woody had called-in to the Christian O’Connell Breakfast Show (on Absolute Radio), where he talked briefly about Cancer Research and that the 80s mean to him.

Way back in 1995 when the Madness Mailing List started there were only one or two Madness web sites out there, but these were all updated on a regular basis.

Over the course of the next few years more and more sites dedicated to our favourite band popped-up, all displaying the latest news, and all bang up-to-date.

This was a far cry from today where most of the Madness fansites had died a death, and only one or two were now updated. This week, we learned that yet another site was to close.

Proving to be a popular haunt for Madness fans for a number of years, the Smash Forums were due to close on the 12th November. You could read the full story in this very issue.

It wasn’t all doom and gloom on the Madness web site front, as the band had now set themselves up with a MySpace account, and the page was now up and running.

Elsewhere in this issue we reported that Suggs was to be the host on interactive DVD game “Suggs’ Pop Culture Quiz”, which was due to be released on the 13th of November, priced at £14.99.

We rounded off this issue with a lengthy article, which originally appeared in the Independant. The article in question looked back at 30 years since the creation of Stiff records – the iconic label that gave us Elvis Costello, Ian Dury, Madness and more.

We started off this issue in an excited mood, as news filtering in from Channel Four’s Teletext service reported that work on the forthcoming Madness musical was well underway, and that two new songs had been specially written by the band for the show.

MTR co-editor Steve Bringe started off with his multi-part article, following the chart success of Madness over in the United States, whilst elsewhere in the issue Jonathan Young had managed to get his hands on the setlist from Cathal’s gig the previous week, and was now able to report that the songs played that evening were:

This Friend I Know

Cheeky-chappie, Lee ‘Swanny’ Swandale also contacted the MIS asking Madness fans to send him scans of a number of single covers for use in a future project.

Further into the issue Wee Stoo contacted us to report that a TV show by the name of ‘Our House’ had blatantly ripped off the chorus to Madness’ ‘Our House’, with Stoo commenting that;

“In the age of sampling, surely permission must still be asked and granted? If so,      those who permitted this: It sucks big time by the way.”

Finally, in an effort to prove to non-subscribers just how good the ‘Madness Unsugged’ fanzine really was we ran the ‘Crunchstock’ article from issue 5.

The tunes have gone to be mastered! Hurrah! It’s taken rather longer than expected, owing to everyone being so busy.

I listened to the final mixes yesterday, lying on my bed, disoriented with jet lag (In LA) and was forced to rise up and have a little dance!

I’ll keep you posted with more news, as I have it. Next step, approving the masters and on to manufacturing. At last!

A few snippets from the book of face..

Lee Thompson – It’s good to be back home…

“Big thank you to The Lee Thompson Ska Orchestra Official for giving us permission to sell extra stickers to raise money for Specialized Limited edition of only 50 more.”

That’s almost it for this week, but before we go…

We recently reported that Radio 2 had added Mr. Apples to the station’s playlist. So far it’s received 13 plays. Last week it was given the coveted title of “Record of the Week”. Sadly, the single didn’t manage to get on the more regular playlists which guarantee 20 plays or more.

Moving on, and The Inflatables have announced that, for a fourth year on the trot, they’ll be returning to the House of Fun Weekender this coming November. The band now take their own slot on Saturday at the Inn on the green. Their antics get underway from 6pm, so will be warming you up for your Saturday evening’s fun.

And with that, we’re just about done. Have a good week. We’ll be back next Sunday with more of the latest Madness and Madness related news.

(With thanks to Hazel Foster) 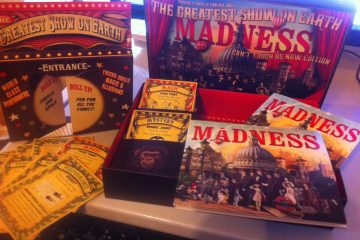